I remember at the end of last year when I saw a photo of someone's newpaper nails, I immediately wanted to give it a try. However, there weren't enough tutorials (actually, none in English) so I was a little skeptical of the process since Google translations doesn't seem to possess any ability to construct grammatically correct sentences. Half guessing, I tried the nail art using methylated spirits thinking vodka itself is ethanol so that means it should be more effective if I use something with 100% ethanol like methylated spirits.

I know, you're probably not surprised. That made me put off newpaper nails for almost a whole year.

This time, using my secret stash of peach vodka, I've successfully created my every own newspaper nail art. My nails also smelt like peach afterwards (bonus). 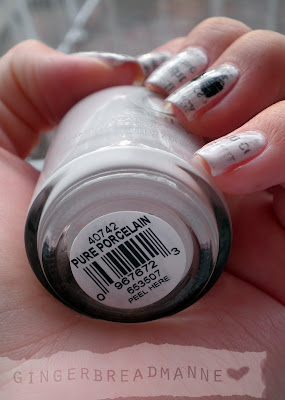 I decided to stick by the traditional colour and painted my nails a nice neutral base, Orly's Pure Porcelain. This polish was thick and difficult to apply but the upside was that I only needed 1 coat for complete opacity. But I whacked on a second coat to smooth out the streaks. I'm still drooling over the smoothness. 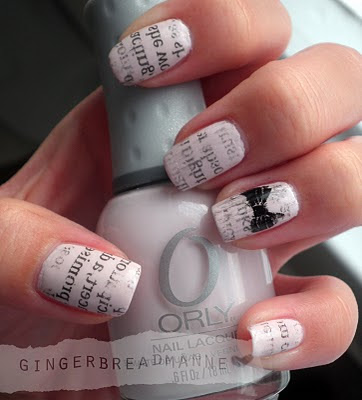 In order for the newspaper print to be transferred, the base polish needs to be completely dried. Being extremely impatient, I accelerated the process by using Qtica's Half Time Polish Drying Accelerator, those liquid ones that come with droppers, and this didn't at all affect the newspaper print transfer. 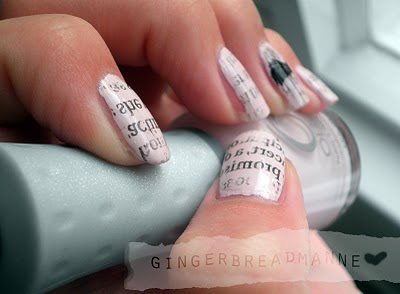 I love trying to decipher the mirrored words but it'd definitely be amazing if they made newspaper that was printed backwards so the print would come out the right way on my nails. My only selfish request, not too much to ask for, is it?
Posted by Anne at 9/17/2011 07:36:00 PM 7 comments:

The fact that the felt tip pen has not left my hand since the beginning of this semester has gotten me thinking about how I can somehow make that into a nail art tool. I remember a while back, I posted an entry where I had used a biro pen to draw on Essie's Matte About You matte topcoat. A felt tip pen is much inkier and doesn't dig into the nail polish surface, making it an accident-proof nail art pen.

So with the "how" solved, my mind wandered towards Chanel's temporary tattoos. I've always wanted to get my hands on them ever since I had heard about them early last year but common sense prevailed.

Enough of my blabberings, I'm quite excited to share with you what I think is a rather good turn out for a design that is so completely spontaneous, inspired by Chanel. 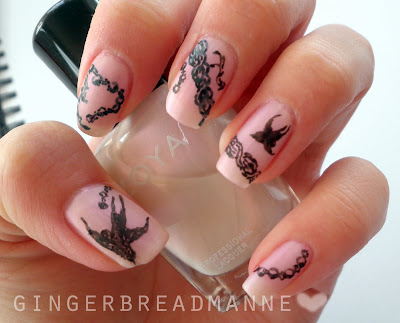 The base is 5 coats of Zoya's Angella. The polish is one of those sheer pink-tinted iridescent pearls. I personally dislike sheer nail polishes because it justs really troublesome appearance-wise when yucky things get caught underneath my nails like glue (blame my course), food (think rainbow sprinkles) and moisturisers. With an excessive 5 coats, the finish is semi-sheer under certain lights and almost opaque in dimmer environments.

Instead of Essie's topcoat, I decided to try out China Glaze Matte Magic's ability to withstand my crazy squiggles. Rather impressive, actually. I've been rubbing on my nails while exerting quite a bit of force and the drawing is yet to budge.

Here's the basic precedure that I had followed to create this:
1. Basecoat (always always always, I absolutely cannot stress this enough).
2. Base colour (in this case, Zoya Angella).
3. Matte topcoat.
4. Attack your nails with whatever pens and colours you've got handy. I've yet to try it with gel pens.
5. After the pen drawing is dried, seal the design with another layer of matte topcoat, or normal, depending on the finish you're chasing. 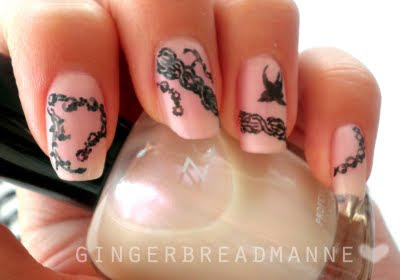 To my surprise, the whole process had taken less time than a normal manicure since matte topcoats dry in a flash, even faster than those polishes that claim to "dry with in 60 seconds (liars)". This is so much cheaper than those Chanel tattoos and just as effective, in my opinion. 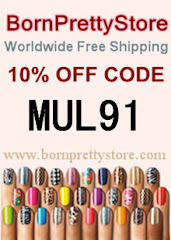